I see myself primarily as a graphic artist and sculptor. I have over the years created many major works that are permanently installed in public spaces, both in- and outdoors. I have several prestigious projects to complete over the coming years.
Future projects will, as my work generally does, center on the classic with invasions of the unusual, the crooked, the “other”, the modern, all that what entails: the loss of meaning, and the renunciation of the grand narrative. I generally work with a concept or a problem, and then find the best medium to express the idea foe example sculpture, object, video and installation. My work revolves around identity, relationships and communities, I often use grotesque realism and humor as levers in an attempt to elevate serious subjects. I invite the viewer into the story in a way that puts her/him in a position find new insights encountering the work. Several of my works explore the eerie, seen from the perspective of the child, but the term eerie as such, is created by the adult position with the overview and the necessary distance, as such artistic studies of “darkness” implies. 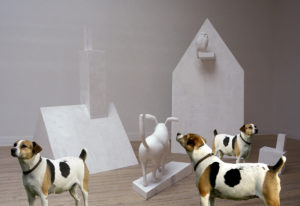 The hare is emblematic of me, and I use it again and again, most recently in a series of small sculpture works, where I let the little hare-cousin express himself with a shotgun, newspaper, a girlfriend and a meerschaum pipe from its flowerpots, where he supposedly lives an anarchic Hillbilly-life and to a high degree is able to protect himself. The hare is the hunted animal – by giving him power over his own life with the gun in his hand, I change the power structure of life and create a kind of comic relief for the viewer, who can strongly identify himself with the hare. Boyes tried to explain art to a hare. You could say that I am an extension of Boyes, by trying to explain art through the transformation of a hare from a wild animal to a semi-civilized stage where wildness is not completely wiped out by the impression civilization.

“With Bjørn Kromann’s works we often lose the perspective overview and a clear sense of time and space; with distorted proportions and lack of logical order, which is a great quality. Instead of taking a purely ironic position Bjørn Kromann-Andersen is actually able to create these tableaux that are not easy to shake off. Bjørn Kromann-Andersen also works with a strong consciousness of material and perfectionism, which creates a convincing expression. “(Art Mag. Anja Raithel)